In various fields of research, the use of animals enables scientists to contribute to our understanding of diseases and to the further development of treatments. Such research must always be carried out in accordance with Swiss animal welfare legislation and be ethically justified (by weighing of interests).

Under the existing legislation, animal experiments are to be restricted to the essential minimum and optimized. This is carried out according to the 3R-principle (replace, reduce, refine): Wherever possible alternative methods have to be used (replace), the amount of animals has to be kept to the bare minimum (reduce) and the treatment of the animals has to be improved (refine).

The SAMS seeks to ensure that animal experiments are conducted in accordance with the regulations and in an ethically responsible manner. Together with its sister academy SCNAT, it co-directs the Ethics Committee for Animal Experimentation (ECAE), which aims to anticipate and discuss in an interdisciplinary way ethical challenges associated with research with animals.

The STAAR Commission – Swiss Transparency Agreement on Animal Research – was created in 2022 by swissuniversities, in order to support the institutions involved with research using animals in their communication with the public. Organisations that join STAAR commit to communication and transparency regarding the use of animals in research. STAAR brings together organisations, both public and private, among them the Swiss Academies, which are represented by Prof. Hanno Würbel, ECAE-Chair.

Researchers who wish to conduct an animal experiment in Switzerland must submit a formal application. According to the Animal Protection Act, it is their duty to make ethical considerations in addition to scientific ones. This is done by weighing interests – a multi-step procedure and demanding task. The ECAE has developed a guide published in 2017 and revised in 2022 that provides orientation and support for implementation.

The guide is relevant for researchers as well as animal protection officers, members of animal testing monitoring committees and licensing authorities in evaluating submitted applications.

Weighing of interests for proposed animal experiments. Guidance for applicants (2022) 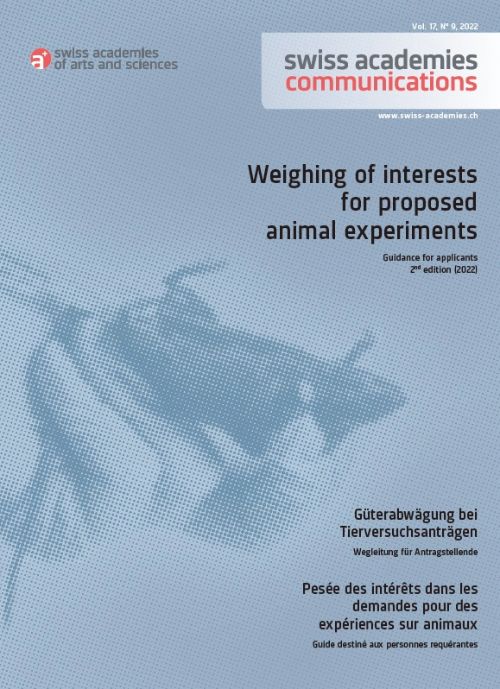 In 2010, the Commission published considerations on the concept of animal dignity and the weighing of interests.

Political initiatives to restrict animal experiments and stricter guidelines for its approval: Scientists are concerned about their research freedom and are frustrated by bureaucratic hurdles. Prof. Hanno Würbel, Head of the Animal Welfare Department at the University of Bern, explains why a strict authorisation process is important for the legitimacy of animal experiments and how such a procedure could be implemented more effectively and efficiently in the SAMS Bulletin 2/2019, available in French or in German.

Animal welfare during the pandemic

The way universities conducted the breeding and upkeep of laboratory animals and animal experiments was impacted by the partial lockdown of Spring 2020. Reports from researchers to ECAE members indicated that in some cases animal welfare was not sufficiently taken into account. Gaps existed in the conception and implementation of emergency plans. The ECAE took this as an opportunity to formulate a statement outlining an ethical perspective and offering guidance for future situations. The statement is not based on systematic data collection. Substantial data on this topic would be of great value to the ECAE.

«Handling of laboratory animals during the Covid-19 pandemic» (2 December 2020) available in French or in German.

The Ethical Principles and Guidelines for Animal Experiments (3rd edition 2005) drawn up by the ECAE are based on the understanding that, although, humans cannot do without scientific studies on animals, the ethical principles of «reverence for life» and respect for the «dignity of creation» requires the protection of animals. The guidelines are based on the conviction that researchers, as responsible human beings, should independently determine, implement and control the measures necessary to overcome this dilemma in the best possible way.

The document is available in French and in German (2005; under revision – revision is planned for 2024).

Popular initiative: Ban on experiments on animals and humans

In February 2022, the federal popular initiative «Yes to a ban on animal and human experimentation» was rejected at 79%. Approval of the initiative would have jeopardised progress in medicine, scientific training, and medical care in Switzerland. The SAMS had therefore strongly recommended to reject the initiative. The argumentation can be found in the SAMS Newsletter of 10.01.2022 (in French or in German).

The Swiss Academies of Arts and Sciences, swissuniversities and the Swiss National Science Foundation (SNSF) had drawn up an argumentation with regard to the discussion of Maya Graf's parliamentary initiative 18.491 «Prohibition of heavy-burden animal experiments» in the Science, Education and Culture Committees of the National Council (SECC-N).

Download the argumentation regarding the parliamentary initiative 18.491 (in French or in German)

In autumn 2021, the ECAE organised a national roundtable with experts in the fields of research, animal welfare and ethics, as well as representatives of cantonal and federal authorities. From the respective fields,  the current approval procedures for animal experiments were exchanged and the need for improvements and concrete proposals for solutions were discussed.

An article in the SAMS Bulletin 1/2022 (p. 6) summarizes the most important findings of the meeting (in French or in German).

On what considerations do researchers base their choice of model organisms for their studies? How do they deal with the implicit moral hierarchy among animals, with primates at the top and fish at the bottom? Scientific and ethical questions concerning the choice of model organisms were at the heart of the symposium on 1 July 2021. The aim was to raise awareness of these issues among researchers, animal welfare officers and regulators. In order to address questions as concretely as possible, the topic of the symposium was discussed with reference to a specific research field – Alzheimer’s disease. The report summarises the results.